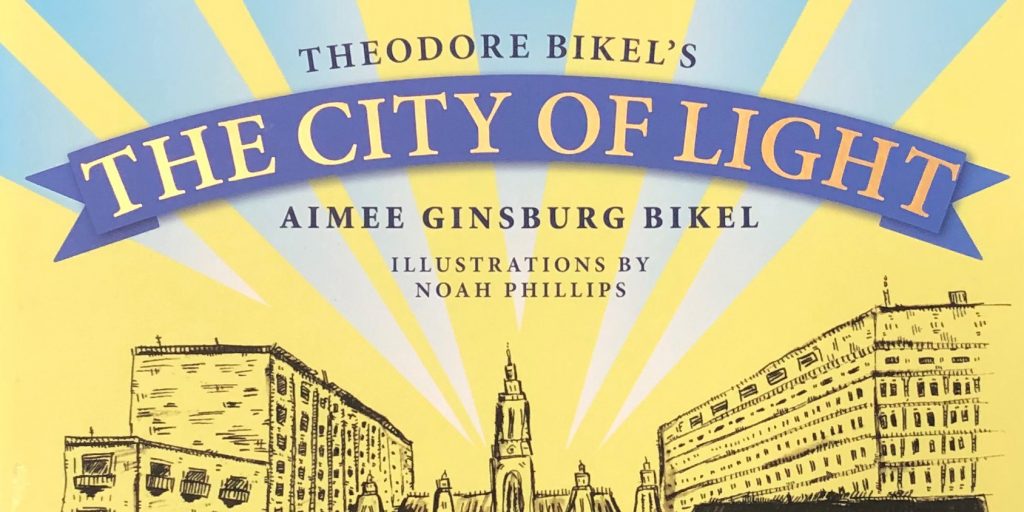 Just in time for Hanukkah, is THEODORE BIKEL’S ‘THE CITY OF LIGHT’ by Aimee Ginsburg Bikel and illustrations by Noah Phillips. The book is based on a story commissioned by Moment Magazine’s Editor-in-Chief, Nadine Epstein that was published in the magazine and read aloud on NPR’s Hanukkah Lights program in 2014.

This charming book, based on a short story by legendary actor, singer and social justice activist, Theodore Bikel, tells the story of a young boy (Bikel) and his childhood in the City of Light (Vienna). His was a beautiful childhood, in the wonderous City of Light, surrounded by the love of his family. But soon, the dark clouds of Anti-Semitism grew, and the city was occupied by the army from across the border. Those who were once friendly neighbors and classmates become dangerous enemies, wishing him great harm for no reason other than he is a Jewish. The Boy dreams that his hero, Judah Maccabi, enters the city to save the Jews, but when he awakes, it had only been a dream. The Boy and his family must flee, leaving the home that they loved forever. Many years later, The Boy, now an Old Man, returns to The City and finds that the light has always been inside his own heart.

This special book, co-authored by Aimee Ginsburg Bikel and illustrated by Noah Phillips, also includes a three-page Yiddish word glossary, a recipe for Honey Cake from Bikel’s Grandmother, and sheet music of a little known Hanukkah song, “Little Candle Fires”; with a link to websites where you can hear Theo singing this song. A wonderful and inspiring story for readers ages 9 and up, THEODORE BIKEL’S ‘THE CITY OF LIGHT’ will make a great gift this holiday season.

Born in Vienna in 1924 and greatly beloved worldwide, Theodore Bikel was thirteen when the pogroms broke out in Austria, culminating with the Anschluss (the Nazi occupation of Austria) in 1938. Frightened and fearing for their lives, Theo and his parents left their beloved city of Vienna and emigrated to Palestine. The events of that terrible time, alongside his longing for the elegance and promise of The City of Light, remained locked in his memory forever; and these experiences contributed greatly to Bikel’s unending commitment to do everything in his power to make this world a better place. “You must explore your roots in the past in order to pinpoint your place in the present or to be entitled to a future. It doesn’t work any other way”, Bikel has said. Now, long-time journalist, foreign correspondent and Theo’s widow Aimee Ginsburg Bikel has poignantly captured these memories, both the sweet and the bitter, by expanding a short story written by Bikel himself in 2014 for Moment Magazine into a full book. The book includes notes on Theo’s career and on his commitment to peace and social justice. Noah Phillips’ illustrations are both naive and moving, echoing the experience of the young boy forced to mature before his time.

Aimee Ginsburg Bikel worked as a journalist for the Israeli Newspaper, Yedioth Ahronoth, for 16 years. As Bikel’s widow, she is the founding director of the Theodore Bikel Legacy Project and is active in projects which strengthen and support the values close to Theo’s heart: social justice and Jewish folk culture. Noah Phillips is a Brooklyn-based writer, illustrator and social worker. His artwork has appeared in magazines, newspapers and a book of children’s stories called The Three Chickens and Five Other Stories.